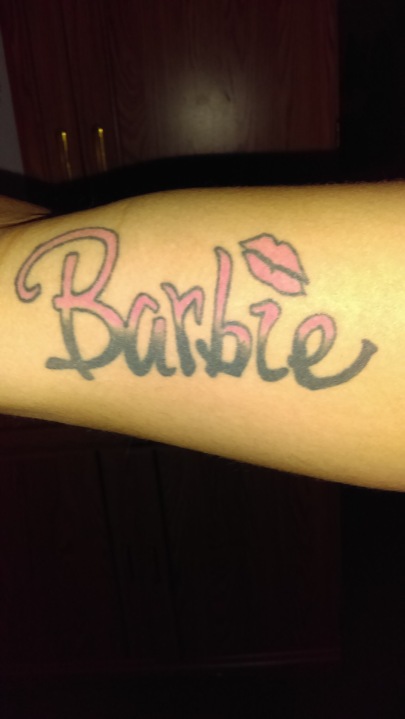 …Playing in the center of this little Powwow on the thick beige rug was Drew holding a Barbie doll in one hand, a brush in the other, stroking the hair of the female figure. I did a double take to make sure I was really seeing this, and then I did a quick spot check on the baby mammas Klan before I said a word looking at every one in the room with uneasiness.”Am I the only one that sees something wrong with this picture?”

“What the hell is wrong with you Eddie!” Jennifer was the first to attack.

“He’s just a kid, stop acting so macho!” came next from Jessica.

“Why does something have to be wrong because he’s playing with a Barbie doll?” barked Drew’s Aunt Katherine.

Billy didn’t say shit in my defense, looking at me with the eyes of a conquered man. Turning around I walked right out the house to wait for Drew, who got in the car about two minutes later.

“What’s that all about? God, Daddy,” he looked at me like I was crazy.

“You shouldn’t be playing with a fucking Barbie doll…  You’re a boy!”

“So?  There’s nothing wrong with it, I’m just having fun.”

Who told him that I wondered?

“What’s fun about brushing a doll’s hair? As a matter of fact, don’t answer that, I don’t want to hear it!”

“Aren’t we moody today?” he said with his exaggerated girlish voice.

“This is just the way I talk.”

“If you’re going to talk like that then don’t say shit!” I slapped the steering wheel and pulled off.

Not another word was said during the ride. I wasn’t even mad at myself for yelling at Drew, feeling like that entire scene was a setup, showing me the type of behavior their pushing on him to get revenge somehow.

…The following day traffic was light coming home from the city so I arrived at my mother’s at 4:30 pm. Since I was early to pick up Drew for dinner plans, I decided to log on to the computer, surfing the web to pass the time until came home.

Out of nowhere, a pop-up showing two grown men shaking their bare asses were in my face, asking me to ‘click here’ to see more. At that moment, the dangers of the internet became real to me!

I had seen enough!  Clicking off the computer, I called my mother.

“I was just on your computer Ma, and these homosexual web pages popped up on your screen.  Please tell me your investigating something for work.”

“Calm down Ed!  Drew was exploring those sites!  I forgot to mention it to you!”

“How could you forget something like that?  I’m probably going to have to pay a thousand dollars to get hypnotized so the memory can be blocked from my mind!”

“These things happen at this age, you can’t over react” she said.

“Who’s over reacting?  I’ve been responding to all of Drew’s antic’s pretty well as far as I’m concerned, but this shit is getting out of hand, I just can’t understand it!”, I said, pacing back and forth in her little voodoo room as I heard Drew announce himself coming through the door.

“Give me a second, I’m on the phone” I answered.  “Mom he just go here and we’re going out to dinner, I’ll see you when I drop him off.’

“He’s just a curious adolescent son, don’t’ make a mountain out of a mole hill.”

I found myself hitting her with a sarcastic…  “Really?   I’ll see you later Mom!” hanging up the phone just as Drew walked in the room, embracing me with a hug.

Hugging him back, looking down at him pretending to be oh so innocent.

“You ready to go get something to eat?” I asked

“Yeah, can we go to Dave and Busters?

“If that’s what you want” I said as we headed out the front door.

Walking to the car contemplating what to say, how to bring it up, wondering what answers and solutions I have that would be compatible with logic in the mind of a 12-year-old.  I was coming up blank. As I sat in the driver’s seat, Drew closed the passenger door.

I started the car but hesitated before putting it in gear, turning to ask… “Drew are you gay?’

Looking back at me with utter surprise he quickly shouted back “No!” with a look in his eye’s like a deer caught in the head lights.

“If you are it’s all right, I understand and it will never change how much I love you.”

A long list of appropriate responses raced through my mind:  Dry humping your Uncle in diapers, favorite color was pink along with your favorite power ranger, talking like a girl, not wanting to play with boys in North Carolina, not to mention the dance routine that your stepmother told me about, but I just said…  “Well…  I was on Grams computer and some gay websites popped-up, I asked her about it and I’m pretty sure she is not the one who was visiting those sites” I explained.

After and awkward 3 second silence…  “I was just surfing the web and came across them so I just explored it.” he explained.

We pulled into the parking space, stepped out of the car.

His eye’s locked on mine as he walked around the front of the Benz, I just opened up my arms and embraced him in the longest tightest hug I can remember ever giving him. He needed it just as much as I did because in that hug was an unspoken communication, that explained we were both unfamiliar with the situation as it is, with neither of us having the resolution.

We weren’t honestly facing the totality of the circumstances at this time, but the door had been cracked.

The “Pink Elephant” was in the room, but neither of us were prepared to discuss it. I asked him if he was gay and he said no, that’s all I wanted to hear. That hug was to reassure him that even if it wasn’t what I wanted to hear, we would find a way to make it through together. Until that pink elephant starts stepping on our toes, I’m not going to bring it up, hopefully he wouldn’t either. We enjoyed our dinner that night, just the two of us (and the pink elephant). The inquiring made us both uncomfortable, but to a degree I could sense he felt some relief.